A Review by Cristofer B.

I read the book called Space Dumplins by Craig Thompson. This book is a graphic novel.  A graphic novel is like a comic book because it uses pictures to tell a story.  In this story, a girl named Violet, goes on an exciting quest to find her dad after he goes missing from work.  Along the way she meets lots of funny characters and finds out her dad really needs her help. I love the book because it takes place in space and has lots of action.

One Day and One Amazing Morning on Orange Street is a fiction story by Joanne Rocklin. This book is really funny and serious at times. Orange Street is a place of secrets, sadness, laughter, and happiness. The book is about the kids of Orange Street figuring out why the orange cones are there.

The story is like Guinea Dog. The main characters are Bunny, Ali, Ms. Snoops, Lendra, Edgar, Manny, and Robert. The setting is on a street in Los Angeles called Orange Street. The author is trying to tell you about Orange Street. The weak point is the very beginning of the story because they have to introduce and explain things.

It shows friendships and hardships. This is a really funny and different book. There are different parts of the book and recipes included. This is one of the better fiction books. This book is just so good. I really liked reading it.     Book Review by A.G.

The book, The Adventures of Tom Sawyer, is a funny action packed adventure story. I chose this because Ms. K recommended the book to me. She thought I would like it. It turns out, she was right!

In the story, Tom Sawyer is a funny, mischievous, lazy, and carefree boy. He is a good friend and best friend to Huckleberry Finn. He lives in a small town in Mississippi with his Aunt Polly. Tom and Huck witness a murder at the cemetery by Ingan Joe. Someone else gets blamed for the murder, but they were too afraid to say anything because they thought he would come after them and kill them. They found a map in Ingan Joe’s pocket. They took the map and went on an adventure ot find buried treasure. The map took them deep into the cave where the x marked the spot. They also went camping and had lots of fun on Jackson Island that was located down stream. Tom also liked a girl named Becky Thatcher. Becky was the judge’s daughter. Tom and Becky went on a boat ride down the stream.

I liked this story because it was full of action and mystery. I would recommend it to friends because I really enjoyed the fast pace and adventure.   Book Review by J.K.

Can the orphans save their friends? I chose the book, The Ersatz Elevator, to review because when I started reading the book, I couldn’t put it down. It’s genre is a realistic fiction. An audience that likes sad stories would like this book. They would like it because it is a sad book.

Last of all, I especially liked it because elevators weren’t popular. They always listened to what was popular at the time. For example, light was not popular. I would recommend the book. I loved this book!

During the summer, we read some great stories from our summer reading list. Third grade read, “From the Mixed-up Files of Mrs. Basil E. Frankweiler” by E.L. Konigsburg. Fourth grade read, “Because of Winn-Dixie” By Kate DiCamillo. Fifth grade students read, “Holes” by Louis Sachar. Read our comments below about what we thought of the stories. 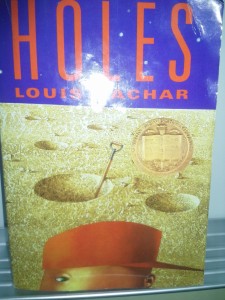 It was very interesting and cool! G.A.

I thought the book was very interesting and the movie was good. M.E.

I read the book a couple of years ago and thought it was okay, but now I liked it a lot. E.B.

I thought the book was really good and think I may read it again when I am older. J.R.

It was kind of unrealistic because it would be illegal to make kids dig holes for adults. D.W.

The book was very interesting and funny! D.K.

I think the book, Holes, was not one of my favorites, but not where I don’t like it. I read it two times and watched the movie two times. Besides that, I really like the book and I do recommend it to others. S.C.

I thought the book was okay. I liked the characters and plot though. K.B.

Holes had a good story to it. K.M.

I really liked Holes. I hope we read a similar book next. E.T.

Holes was a good book, but I wouldn’t call it my favorite book. J.B.

The book was okay. I would read it again one day. K.A.

I liked the book Holes because I think it was funny, kind of sad, and I think it taught you about friendships and hardships. that is why I liked Holes. A.G. 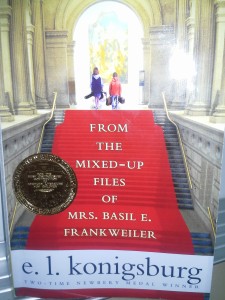 From the Mixed-up Files of Mrs. Basil E. Frankweiler read by 3rd graders.

3rd Graders Take On The Story, Charlie and the Chocolate Factory.

I liked when the girl blew up into a blueberry. J.Y.

I liked when Agustus Gloop fell into the chocolate. O.C.

I liked the ending when Charlie wins the chocolate factory. N.D.

My favorite part was when Charlie got to get the dollar to buy chocolate and won the golden tickets. L.W.

I liked when they went into the first room that was full of candy. A.S.

My favorite part was when Charlie found a dollar to buy chocolate and went to the Chocolate Factory. M.O.

My favorite part was when he ended up in the Chocolate Factory. K.L.

I liked when Charlie went in that glass elevator. E.P.

I liked when the Oompa Loompas started to sing. G.F.

My favorite part was when Charlie went into his grandparents room and they told him the story. A.L.

My favorite part was when the grandfather danced. A.H.

I did not read the book or watch the movie. A.U.

5th Graders Comment on Novel They Have Been Reading: November 2013

Treasure Island by Robert Louis Stevenson (Adventure) “It’s a about a boy’s father who is dead. There are pirates and Long John Silver in the story. He goes with the boy to Treasure Island and find a cave. There they find Flynn’s treasure”. J.R.

Flashpoint by DC Comics (Comic Series) “It’s about bad guys. The first story is about Reverse Flash. He is trying to get back at Flash for killing his mother. Flash beats Reverse Flash. ” M.E.

Diary of a Wimpy Kid- Hard Luck by Jeff Kinney (Humor) “This book is about a kid in middle school whose friend stops being his friend. He trust his magic 8 ball, but it doesn’t tell the truth. In the end, he and his old friend become friends again. ” J.B.

A Nest for Celeste by Henry Cole (Fiction) “It’s about a mouse that lives in a crack in the wall. Then, he moves into a boot. He meets Joseph who is the owner of the boot. I like how the book was written in a different time period”. A.B.

The Bad Beginning by Lemony Snicket (Realistic-Fiction) “It’s about three little orphans that use to live in mansion. The mansion was burned down, so they went to live with Count Olaf. The orphans’ parents left them with a big fortune and Count Olaf was trying to steal it from them”. E.T.

The Land of Stories-Wishing Spell and The Enchantress Returns by Chris Colfer (Fantasy) “I like how both of the stories connect all of the fairy-tale characters that you read when you were little with kids your age”. E.B

4th Graders Comment on Books They Have Read: November 13

Zoo 3-D by David E. Klutho  (Non-fiction) “It has amazing 3-D graphics. If you like animals, I think you should read this book.” S.J.

The House of Hades by Rick Riordan  (Adventure/Fantasy) “It’s very thrilling and has lots of twists and turns.”M.E.

The Case of the School Ghost by Dori Hillested Butler  (Fiction) “It is funny, scary, and I think you should read this book.”J.G.

The Swiss Robinson Family by Johauhn Daris (Realistic/Fiction)  “This book is good. It’s about a family that crashes on an island and they build a big tree house. They have to be adventurous and work together to survive.” R.K.

Charlie and the Great Glass Elevator by Roald Dahl (Fiction) This book is about when Charlie and Mr. Wonka fly to outer space in a great glass elevator. They see weird creatures, a ginormous space hotel, and I think it’s very cool!” E.C.

Bad Kitty Takes a Bath by Nick Bruel (Fiction) I like this book because it’s really funny and it’s about a bad kitty that always gets in trouble. I hope you will read it.” R.G.

The Witch’s Guide to Cooking with Children by Keith McGowan (Fiction) I like the book because it had twists in some corners. For example, the title isn’t really what it means. It’s about these two kids that are walking to the library. They see a lady with a dog that was carrying an odd looking bone. The kids found out that the bone belonged to a child. A.F.P.

A Walk in New York (Non-Fiction) This book is about a father and his kid. They look at places in New York and tell you the facts about the places. They also have a picnic in Central Park. A.D.P.

Geronimo Stilton (Fiction) The book is about a mouse that goes on adventures and finds new stuff. He can fly on dragons. J.L.

Please prove that you are not a robot.

Powered by WordPress | Hosted by Edublogs | Protected by CloudFlare